Alfred Ilg and the Ethiopian Railway

On January 7th 2016 we commemorate the Swiss Engineer Alfred Ilg on the centenary of his death. Alfred Ilg lived in Ethiopia from 1879 to 1906 and worked for the Emperor Menelik II. As his technical advisor and state councilor, he contributed significantly to the construction of the new capital, Addis Ababa, and to planning the railway line from Djibouti to Addis Ababa. His technical innovations, among other things, brought significant change to Ethiopia.

In 1894, Alfred Ilg was given licence by Emperor Menelik II. to construct a railway line from Djibouti to Harar, from Harar to Entoto, from Entoto to Kaffa and on to the White Nile. Together with Léon Chefneux, Alfred Ilg established the Compagnie Impériale des Chemins de Fer d’Éthiopie. In autumn 1897, construction began in Djibouti. The first segment of the line was inaugurated on December 24th 1902 in Dire Dawa, a new town created in the context of the construction of the railway line. 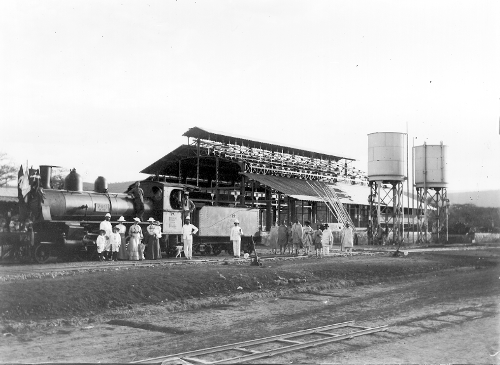 The photograph shows Alfred Ilg’s family next to a locomotive, manufactured by the Schweizerische Lokomotiv-und Maschinenfabrik Winterthur. They stand in front of the newly built railway workshops in Dire Dawa.

The Ethnographic Museum at the University of Zurich commemorates the centenary of the death of Alfred Ilg with a series of events. For details see: http://www.musethno.uzh.ch/veranstaltungen.html