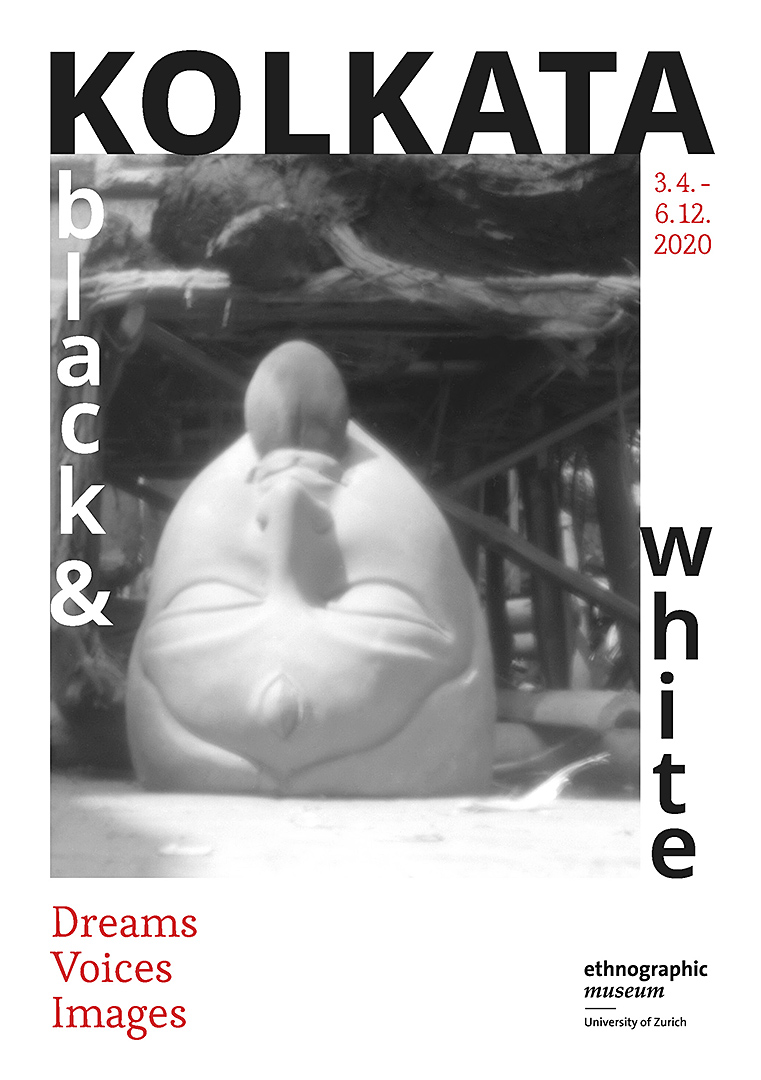 When Bengalis talk about Kolkata, they do so with bright eyes; they take pride in their city as the undisputed cultural capital of India. In the West, on the other hand, Kolkata was regarded as the "infernal city of poverty and despair" and "quintessential urban horror story" according to the American historian Jeffrey N. Dupée.

During numerous extended stays in Kolkata, the photographer Samuel Schütz and the sound documentarist Thomas Kaiser explored the gap between Western clichés and the residents’ own perceptions of the city.

The ever-changing images projected in the exhibition space, the voices, sounds and moments of silence, replace outsiders’ black-and-white clichés of the city with shaded and nuanced views gathered from the inside.

Baul singer Vishnupada Das from Dhakuria in the North 24 Parganas District of West Bengal sings a song dedicated to the Goddess Kali. Recorded on 20 August 2006.

Oh Shyama, Kali, come dancing to me; / Mother I will go with you! / Golden bells around your red feet – / I can hear their jingle. / I call you oh Mother, oh Mother and sit up in your lap; / peace I will find in your lap.

Oh Shyama, Kali, come dancing to me; / Mother I will go with you!

Are you really dangerous, / oh Shyama Ma, oh Mother, / and make us fear the darkness? / I will spend my days / chanting Kali, Kali, Kali. / Oh Shyama, Kali, come dancing to me; / Mother I will go with you!

Dream recounted by Naisha about a deceased lover’s body lying frozen in a glacier. Recorded in March 2003.

After coming to this place, one person, a soldier, an army man, used to love me a lot. He used to come and visit. He had gone to Darjeeling. From Darjeeling, he had not come to see me for six months. What I saw was rock. Over there – only rocks. That’s where he did his duty, among the rocks. And I saw ice, cold ice. All sorts of things can be found in that ice. People say that if someone dies, their body is thrown there. I saw that a person was lying in the ice. He was frozen hard; he was asleep. Somebody came to me and said, “You know the man who loves you so much? He is calling you to his house”. “Why would I go to his house? He used to come here. I will talk to him right here. Why should I go to his house?”

She said, “No! He loves you very much, as you know. He called for you.” “When?” “He came a week ago. He feels restless and longs for you.”

Telling this lie, she took me, and when I reached there I found a corpse, a dead body. I thought it could be his father or mother. They made me sit down. I looked up and I saw that the face was looking at me. The man who loved me so much. Then his mother said, “Ma, he used to love you so much. That is why I brought you here. I could not tell the truth, so I brought you here by telling a lie. Whatever he owes you, forgive him!” I was weeping, and some people were holding me. I said that I’d forgive him to the extent that he loved me. Then he was buried. The burial was over, dusk fell, and I came back to my own place. That’s it.

Virtual tour through the exhibition: