If, in a shoe, there is a label that says ‘Made in Germany’, I can sell it for a high price. People say things from Germany are good quality. Shoes ‘Made in Italy’ or ‘Made in Brazil’ are very popular as well. And even shoes ‘Made in China’ can be sold for a lot, if they have been worn in Europe first. Because the Chinese produce shoes of two different qualities: the high quality that goes to Europe, and the low quality and the fake brands that we get in the shops here in Africa. I can explain to a customer that a shoe may be ‘Made in China’ but, because it was bought and worn in Europe first, it is still an ‘original’!

Today, no anthropological inquiry into a local life world can ignore the economic, political and cultural influences of various global dynamics. Even in regions that may appear remote to the European onlooker, people’s lives are often shaped in significant ways by ideas, commodities, consumption patterns and practices that come from other parts of the world. In contrast to the classical period of anthropology around the turn of the 19th and 20th centuries, when an isolated ‘tribe’ was considered the ideal unit of analysis to study aboriginal peoples unaffected by Western civilization, nowadays anthropological studies increasingly focus on global flows of goods, people, ideas and media images and their interplay with local world views and everyday experiences. In that sense, the everyday life of the group of street vendors in Tanzania that the exhibition Making a living from old shoes focuses on is organised around a commodity that is inscribed with various global connections. 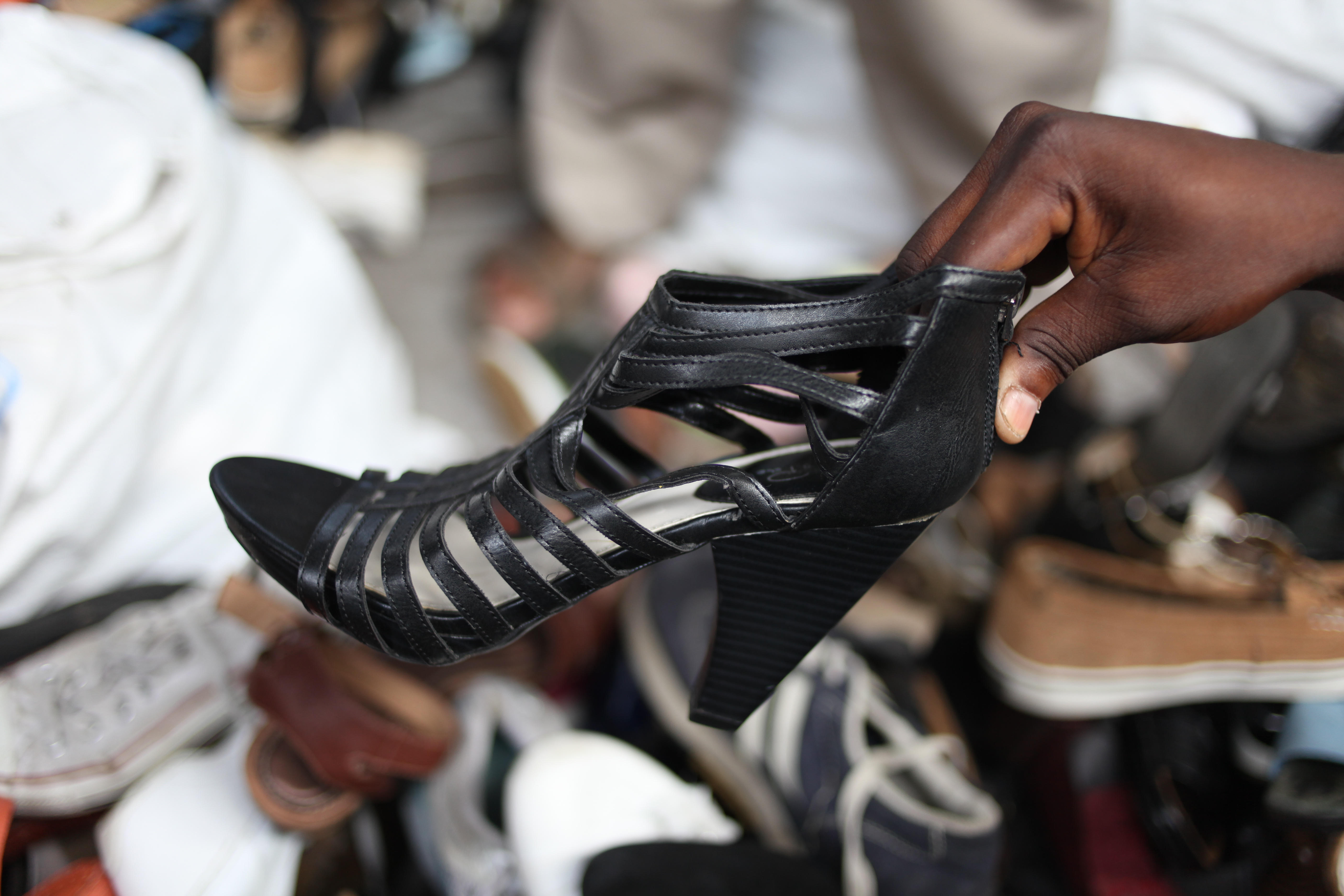 Actor in a complex history of entanglements: a shoe vendor in Karume Market looks for sellable commodities. Photo: Link Reuben 2016.

Firstly, the ladies’ shoes that this particular group of street vendors specialises in originally come from Asia, the USA and Europe, and therefore have already travelled a long distance before arriving at Karume Market in Dar es Salaam, the biggest local market for used clothes and shoes. In their places of origin they have been discarded and deposited into a charity collection bin, often in the mistaken assumption that they would subsequently be redistributed free by charity organisations to needy people in disaster zones and poorer parts of the world. In fact, the donated clothes and shoes go to sorting centres in places like Eastern Europe or Morocco, where they are separated from the unsellable clothes and prepared for re-sale in poorer world regions.

Secondly, the production of shoes is a global process in its own right. A shoe marked as ‘Made in Italy’, for instance, is Italian only in terms of its design and brand name. The leather it is made of may come from Brazil, may have been fashioned in a factory in Eastern Europe, and flown to Asia where it was sewn into a shoe that was ultimately put on the shelves of a shop in Switzerland.

As he reaches out for a second-hand shoe in Karume Market, therefore, the street vendor becomes an actor in a complex history of worldwide entanglements. As the short excerpt from an interview above shows, the vendor speaking is well aware of the global connections of his commodity and he knows how to make use of these connections to effect a sale, when he advertises a shoe ‘Made in China’ as a European original. Through his analytic examination of the shoes that – from his vantage point – come from remote world regions and through his involvement with the respective fashions and demands of different groups of customers, he has developed a highly-specialised knowledge about the market of the streets and its dynamics. As he chooses a particular pair of used shoes in Karume Market, he is displaying skills that are indispensable in this profession, if he is going to make a living from old shoes.