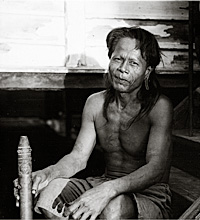 Wolfgang Leupold (1895–1986) was appointed as a geologist by the Dutch East Indies Administration and spent six years in the Northeast of Borneo with his family, from 1921 to 1927. This stay is documented through artefacts, pictures and records. Leupold’s two sons Urs and Rudolf donated these personal keepsakes to the Ethnographic Museum of Zurich University in 2008 in order to preserve knowledge that had been handed down within the family and, at the same time, make it available for research purposes.

Leupold’s collection, now presented to the public for the first time, goes far beyond a mere biographical dimension. It offers broader historical insights and valuable objects preserving the skills and knowledge that went into their making.

In the year 2009 the ethnographic museum of Zurich University received the donation of a highly interesting collection of Indonesian artifacts. The approximately one hundred items belonged to the family of the Swiss geologist Wolfgang Leupold. In 1921 Leupold was appointed as geologist in the Mining Services of the Dutch East Indies Administration and traveled to Indonesia, where he was to spend six years in Northeast-Borneo with his wife Erika and son Urs, who was born there.

Besides the collection of objects the museum was also given other materials: audio tapes and written memoirs of the years in the Dutch East Indies, as well as photographs, the latter as glass plates and as prints with annotations by Leupold. All these documents were extremely useful in bringing alive the colonial experience of this Swiss family.

Leupold’s expeditions most frequently led him into areas that were not easily accessible and often deserted. To find his way through the rain forest and make use of the waterways as efficiently as possible, the Swiss geologist needed experienced pathfinders and river guides whom he recruited from the local population. Many an object in his collection must have come to him through such contacts. On the one hand he obtained everyday indigenous utensils and instruments, such as baskets with shoulder straps, an ax, blowpipe and shaft as well as plaited hoods. Leupold, however, also received valuable pieces, most probably as objects of prestige given as gifts during negotiations. These remarkable artifacts – painted jackets in bark cloth, expressively decorated bamboo quivers and shields as well as ear pendants carved out of the beak of the hornbill – all testify to the Dayak’s great power of artistic expression.

While Wolfgang Leupold was exploring different regions of Kalimantan with his guides and porters, his wife and child experienced a life unlike anything she had known. Their everyday life had as one of its few constants a group of objects that accompanied them from one to the other of their frequently changing homes. Not only European furniture and Swiss landscape paintings characterized the interiors, but also Chinese ceramics, brass vessels and textiles from Java and Sumba, all bought locally. These objects complement the larger group of items in Leupold’s collection originating in Northeast-Borneo and represent a more traditional souvenir of European colonial experience.

The exhibition “Many layered Borneo” shows the collection of objects given to the ethnographic museum together with Leupold’s impressive photographs, as well as other historical documents. It aims at giving a vivid experience of the conditions of the Dutch East Indian period of Wolfgang and Erika Leupold and shows the remembrances of these years. Thus, the interaction between photographs, objects and written testimonies recounts the recollections and knowledge of a time past.